I’m excited because I released my first 3D Unity game as open source and you can play it in VR! (No binaries, yet. Should there be?)

None of the graphics, music or sounds are original. They’re all available from the Unity Asset Store in the Space Shooter Tutorial assets. The original 2D tutorial is here: https://unity3d.com/learn/tutorials/s/space-shooter-tutorial I worked my way through it exactly 2 days before it was updated! I had to figure out a lot of this on my own because Unity 5 changed a lot of things. So I think that other programmers will benefit by seeing the way I did things.

You can also see the differences in a 2D and 3D game. I figured out how to take the 2D game and make it into 3D. (I’ve always been fairly competent at math, but only as far as algebra and a little trig. That was more than enough!)

Most of the code is my own. I added the AIController class from scratch to make “smart” aliens. (I added several other classes, as well.) Since I’m new to Unity, it took me a little bit to figure out (but only a couple of days).

It’s still a work in progress. Eventually I plan to update all of the graphics, music, add new aliens, power ups, etc., and release this as a commercial game.

And who knows? Eventually, the open source version may get pretty good <hint> especially if I have some help. </hint> 😇

*** EDIT 2017.11.07 *** I have temporarily pulled the repository. There were problems I won’t go into here, but suffice it to say that I cannot distribute Unity Store assets. (And since I mix them in with my own assets, it’s difficult to separate. The solution is to create all new assets. This is not as big of a job as it sounds. In fact I’ve already got my first spaceship: Screenshot of spaceship model designed in MakeVR for Space Shooter VR)
Source code is here: https://bitbucket.org/LelandGreen/space-shooter-vr

There are notes in the repository about optimizing the game for low-end systems. Basically, click the GameController object in Unity and change the settings. You can also change the two custom “Delay” objects that I have. Those control the delays on the AI, so increasing those values will make them less smart. (In theory – I’ve not got that far. LOL)

Please note that there is now a board on that repository. That means that team members can post issues, suggestions, etc. If you would like to become a team member, please send me a link to an example of your code (preferably C# – but I can read anything). No offense, but I’m going to be picky about who I allow. Alternatively, if you do not have any code online, please send me your resume. I’m taking this seriously. Also let me know if you would like to work on the open source or the commercial version. Of course if you want to work on the open source, you can just submit a pull request and I’ll take a look! 😎 (If you don’t know what that means, then nevermind – or else go figure it out. I’m not going to teach all about Git.😉)

And by request, a demo from in VR mode. Not a lot different except at the end when I show how you can turn your head and watch stuff. Space Shooter VR Gameplay from within VR 20171105

Screenshot is from the linked video at 0:10. Note the alien lasers in the frame at left. 😎 He was a long ways off and would have been hitting me if I had not been moving! When they get close to you, they’re impossible to avoid, right now. So you have to suit them. (Clicking the image also links to the 1st video.)

I just got MAD Magazine (the “Totally MAD” CD collection from Brøderbund Software) to load without the physical CDs following these instructions: http://www.blogordie.com/2015/11/installing-broderbunds-totally-mad-under-windows-10/

The result is that I now have every MAD Magazine from (the first issue in) 1952 through 1998 available on my computers without needing the physical CDs! These are also searchable. Which is very cool!

(Unfortunately, I cannot share very many screenshots like this as they have made it tedious to take them. I believe that is their copy protection – and it is quite good!)

But here are a few screenshots for your browsing pleasure:

Screenshot of app with MAD Magazine covers from 1952.

Do you have a favorite MAD Magazine issue, topic or article that you remember? Just buy the CDs and you can read them all!

And I would love to hear from everyone in the comment section below. (Or on your favorite social media where you may have seen this.)

I created a new “Cannabis Mandala” (or “Weed Mandala”✌??) today. The full-resolution version is available here: 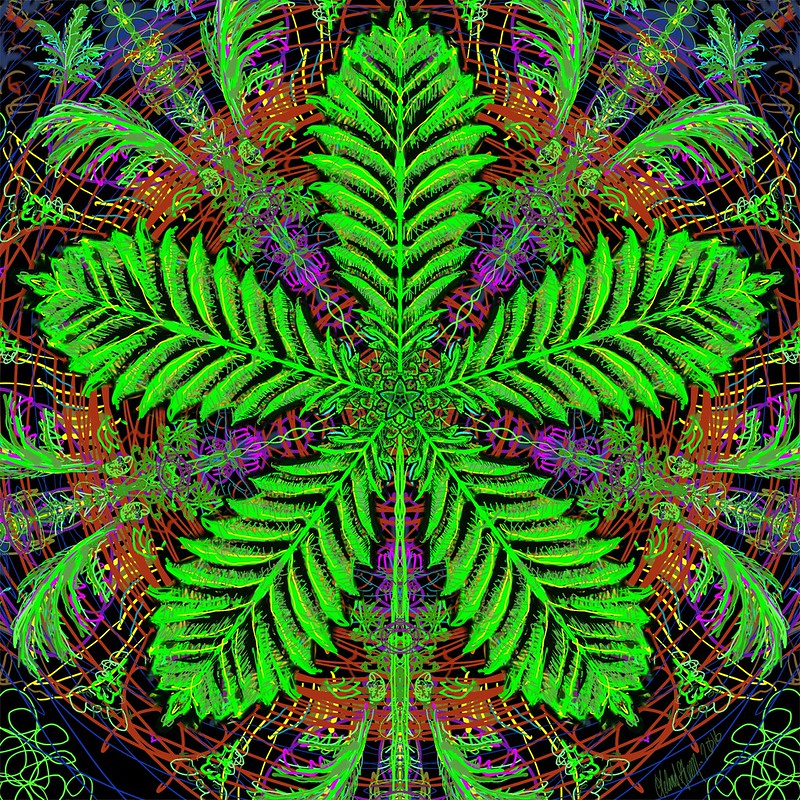 I just decided that all of my art books should be together. There are some that I’ve had since high school – maybe even before – and they have (almost) always been in the same bookshelf. So it just made sense to put all of the art books in that bookshelf.

I think you can tell a lot about a man by the books he reads. So, to that end, take a look!

Update 2016.06.24: After sorting through even more books, I now have 3 shelves full of art books. I’m updating this photo for your enjoyment pleasure. (Or something like that.)

Oh! And I actually found some more, so I guess I’ll have to clean of the shelf below these! (Not shown.)

This is tagged as Geek Stuff  because that little shaman guy at top-left is holding an Intel Pentium chip. And the blue heatsink, near the center on the right edge, belongs on that chip. It’s not a Pentium II, or anything fancy like that. It’s a Pentium. (Pics needed???) Man we thought that was the greatest thing!!!

The king of the beasts, baby!

I love this result from nametests.com on Facebook. I think they got it right, don’t you?